The culprit is a fungus known as Fusarium oxysporum f. sp. palmarum

We continue to lose many Queen and Washingtonia palms in residential and commercial properties all over South Florida.  According to University of Florida IFAS Extension, early symptoms include a one-sided discoloration of the lower fronds (See photo).  Eventually all of the lower fronds turn brown, and the dieback moves progressively upward in the canopy until the entire palm is killed. (See photos).

Once symptoms become evident, decline usually progresses fairly quickly. Palms often die two to three months after initial symptoms are observed. Unlike nutrient deficiencies, there is no stunting or frizzling of the fronds as often seen with nutrient deficiencies.  And with queen palms the dead fronds do not typically droop or bend down and break off as they often do after a lightning strike or infection with Ganoderma zonatum, another fast spreading, hard-to-control fungus. Rather, they remain relatively rigid as if freeze-dried (see photo below).

It is not known exactly how the Fusarium oxysporum fungus spreads so widely in the South Florida landscape, but wind-blown spores are strongly suspected as a primary method of transmission.  Contaminated pruning tools may be a second method by which the fungus spreads. Therefore, do not prune palms that look suspect. If you must prune them, do so at the conclusion of the job and then sterilize your pruning tools to avoid future contamination. 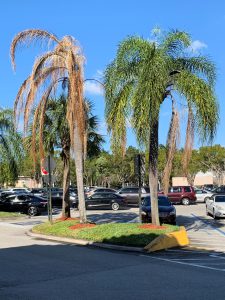 Currently, there is no cure for this lethal disease which can easily spread from one infected Queen or Washingtonia palm to another.  Therefore, it is very important that you identify and remove Fusarium infected palms from your property as soon as possible.

When you remove a palm, it is always a good idea to grind out the stump.  That is because palm stumps are ideal sites for Ganoderma zonatum.

As far as replacement options are concerned, if you remove a Fusarium-infected palm we recommend you not replace it with another palm of the same species.  Early identification and removal of diseased palms from your yard or neighborhood may significantly reduce disease spread saving you dollars and keeping your landscape lush and beautiful.

Note: All images and contents are the property of UF/IFAS.