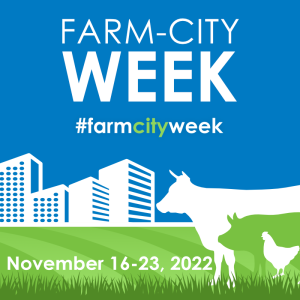 Not every high school kid would give up a couple of days of their fall break to work on a farm, harvesting collard greens, or spend hours on their feet distributing food to the needy. But for years, Future Farmers of America (FFA) members and local Scouts have done just that—giving of their time and energy so that others are well fed on Thanksgiving. This annual effort is part of Farm-City Week, a national celebration held every year during the week leading up to Thanksgiving. The idea is to highlight the contributions local farmers and rural communities make towards improving life in cities. This recognition started in the late 1950’s, when President Eisenhower signed a proclamation declaring a national Farm-City Week. Ever since, rural areas dominated by agriculture have partnered with nearby cities to sponsor farm tours, food distribution efforts, public proclamations, and poster or essay contests. For most of early American history, farming was the primary source of food and income for a majority of citizens. Unless you lived in a major urban center, it was common to live on a small family farm. Sixty years ago—around the time Farm City Week started—my dad and grandparents were picking cotton and milking cows by hand. In the span of one generation, I’ve never done either. As farms have been sold off or developed into suburbia, the average American is rather distanced from the production of their food. Farm-City Week serves as a bridge between those handfuls of farm families who are still providing the bulk of the food we eat every day. In our area, the UF IFAS West Florida Research and Education Center’s Experiment Station in Santa Rosa County plays a very hands-on role in Farm-City week. For years, they have planted vegetables in their demonstration fields and worked with local agriculture students to grow and harvest the food the week of Thanksgiving. This week’s harvest group included at least 3 local high schools and a Boy Scout troop, who went to work cutting the collards and bagging them up. The very next day, these bags of fresh vegetables were placed in the vehicles—and sometimes the bicycles or backpacks—of the neediest in our community. The Escambia County event was held in coordination with local nonprofit Feeding the Gulf Coast, and additional food donations were provided or paid for by another twenty sponsors. Each distribution kit included a ham or turkey, a loaf of bread, locally grown vegetables (collard greens, cabbage, zucchini, & sweet potatoes), apples, and a dessert. At least 50 volunteers assisted with yesterday’s giveaway, benefiting hundreds of families in Escambia County.
by carriestevenson
Source: UF/IFAS Pest Alert Note: All images and contents are the property of UF/IFAS.
Tags: news pests